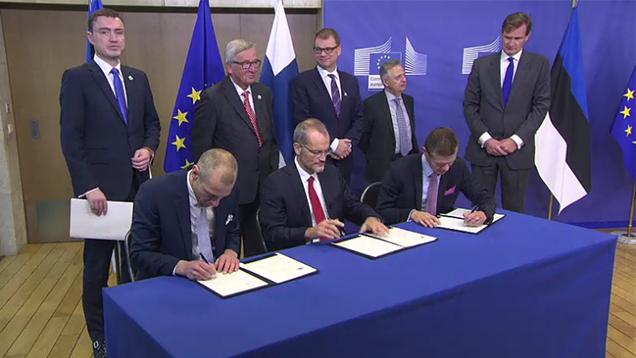 On 21 October, the European Commission, Baltic Connector Oy from Finland and Elering AS from Estonia signed an agreement concerning the construction of a transmission gas pipeline between Finland and Estonia.

In August 2016 the European Commission granted EUR 187.5 million from the Connecting Europe Facility for Energy (CEF-E) as investment aid for the Balticconnector project of the two companies. The EU co-financing covers 75 per cent of the total building costs of the pipeline, amounting to EUR 250 million.

The signing event took place in connection with the European Council meeting. Present at the event were Jean-Claude Juncker, President of the European Commission, and Prime Ministers of Finland and Estonia Juha Sipilä and Taavi Rõivas.

On behalf of Finland the agreement on EU support was signed by Herkko Plit, President and CEO of Baltic Connector Oy, on behalf of Estonia by Taavi Veskimägi, CEO of Elering AS, and on behalf of the Commission by Dirk Becker, Executive Director of the Innovation and Networks Executive Agency INEA.

– We are taking an important step to connect the European gas pipeline networks with each other. The Balticconnector project could not be implemented without this significant input from the EU. The State of Finland is committed to funding the projects by a capital of EUR 30 million, says Prime Minister Juha Sipilä.

After the Balticconnector and other projects to strengthen gas infrastructure in the Baltic region have been completed Finland will truly be part of the single European gas market. The new connection will open the gas market for competition, enhance our emergency supplies and energy security, and create growth opportunities in the whole region. These are the benefits of the project listed by Minister of Economic Affairs Olli Rehn.

– The agreement we have just signed allows us to move on to the actual construction of the transmission gas pipeline. I also wish to thank the Governments of Finland and Estonia and our Estonian partner for the long-term effort that led to the implementation of the project, says Herkko Plit, President and CEO of Baltic Connector Oy.

– Today we have taken a major step in terms of the future gas market of Finland. Now we have the important task of implementing the gas pipeline project as planned, thus contributing to the opening of gas markets. In a very short time we have recruited skilled and motivated staff, which is also why we can now proceed with the project with a great deal of confidence, Plit continues.

Balticconnector combines the Estonian and Finnish natural gas networks by a transmission pipeline that is 150 kilometres long, of which 80 kilometres will be laid on the seabed. According to the agreement, the project is to be completed by the end of 2019.