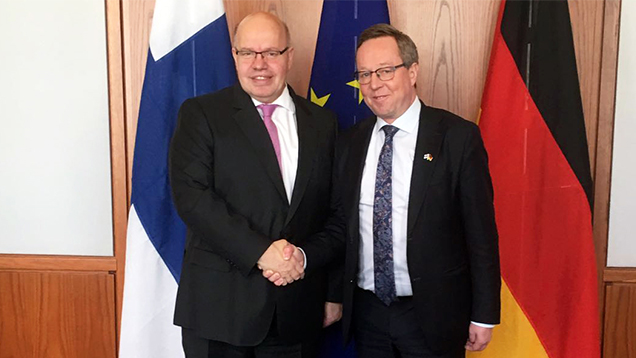 Ministers Altmaier and Lintilä agreed that the current world trade situation is alarming. Both countries were afflicted by the financial crisis and have now achieved more balance in their economy. A trade war would be have disastrous effects on the economy in both Finland and Germany. Ministers had also similar views on the role of the EU. The EU must defend strongly the rules-based free trade.

“We had a long discussion about how the forthcoming G20 meeting, for example, could be a convenient opportunity to find a solution to safeguard free trade. The EU should coordinate a common position, and I have already said that Finland is prepared to cooperate actively with Germany on this,” Minister Lintilä says.

The Ministers discussed the forthcoming multiannual financial framework of the EU and especially the future of the EU’s cohesion policy.  They agreed that the cohesion policy should be continued across the Union and that it should better promote European competitiveness compared to the United States and Asian countries.

“Cohesion policy should be a modern tool for generating more skills, innovation and competitiveness. Finland and Germany share an interest in this. The most important issue is the more efficient use of funding,” Minister Lintilä reminds.

The Minister of Economic Affairs travelled to Berlin as part of his pro-active campaign to influence the EU’s forthcoming financial framework. This spring Minister Lintilä will be meeting with six Commissioners and ministers of several Member States. Permanent Secretary Jari Gustafsson from the Ministry of Economic Affairs and Employment has also joined the effort and visited four European capitals (Berlin, Paris, Brussels and Haag) to discuss Finland’s views.

In Berlin, Minister Lintilä also visited the German Research Center for Artificial Intelligence (DFKI) and met with Deputy Chief Executive Officer Volker Treier from the Association of German Chambers of Commerce and Industry.