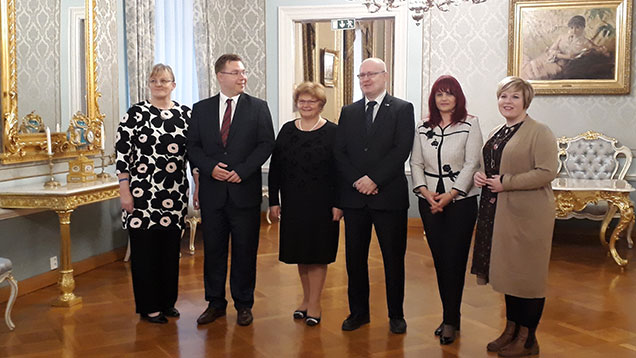 Minister of Employment Jari Lindström and Minister of Social Affairs and Health Pirkko Mattila met Romanian and Croatian ministers and officials responsible for employment and social affairs in Helsinki on 9 November 2018. They discussed the programme for Finland’s forthcoming Presidency of the Council of the European Union.

Romania, Finland and Croatia will make up the Presidency Trio of the Council of the European Union from January 2019 to June 2020. The three countries are currently preparing a common programme determining the topics addressed by the Council over the three presidencies. The Trio Programme will be published later this year.

The ministers discussed a number of topics during their meeting, including the close links between wellbeing, employment and economy, the competence and mobility of the labour force, the opportunities and challenges created by the transformation of work, and gender equality and the promotion of wellbeing at work.

“Transformation of work will be a topical discussion theme during Finland’s Presidency. The EU must find ways to encourage Member States to take action to maintain and update their citizens’ competences,” says Minister of Employment Jari Lindström.

“We must make sure to keep people at the centre of policy-making. Wellbeing economy is a comprehensive approach that considers the ways wellbeing and employment affect economic growth on one hand and how economic growth influences people’s wellbeing, on the other hand,” says Minister Mattila.

This is the third time ministers of the Presidency Trio meet. The two previous meetings were held in Croatia and Romania, respectively. In the Helsinki meeting, Minister Lindström and Minister Mattila were joined by Minister of Family Affairs and Social Services Annika Saarikko. The ministers’ meeting was held in the Government Banquet Hall on Friday 9 November.

On 9 November, Minister of Employment Lindström also met Commission Vice-President Valdis Dombrovskis. They discussed the future of the European Strategy for Growth and Jobs and the social dimension of the European Economic and Monetary Union.