Long-term unemployment continued to fall in May 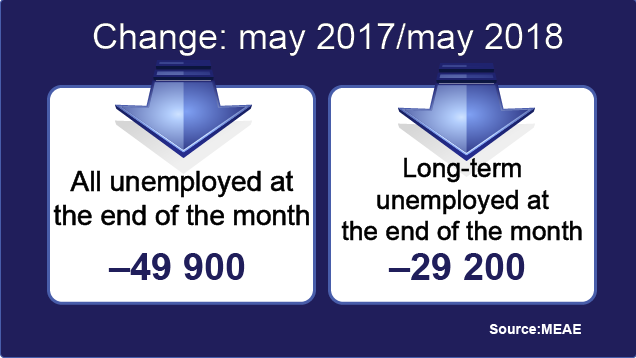 The number of long-term unemployed — that is those who had been unemployed without interruption for at least a year — amounted to 77,300, down 29,200 on the previous year. The number of unemployed jobseekers over 50 years of age was 92,900, or 20,000 fewer than at the same time a year earlier.

Unemployed jobseekers under 25 years of age numbered 29,600, representing a decrease of 5,500 from May last year. Among unemployed young people, the period of unemployment ended within three months on average in 68.1% of cases between January and May, which is 5.8 percentage points more than the year before.

At the end of May, the number of persons covered by services included in the activation rate amounted to 130,600, up 6,300 on the previous year. These services include pay subsidies, labour market training, work trials and self-motivated studies.

According to the Labour Force Survey issued by Statistics Finland, in May the number of people in employment was up 90,000 on the previous year. The employment rate was 72.3%, which was 2.9 percentage points higher than in May the year before. According to the Survey, the unemployment total was 261,000, which is 35,000 fewer than a year ago. The unemployment rate was 9.3%, or 1.5 percentage points lower than the previous year.

In the Ministry’s Employment Service Statistics, people that are not in an employment relationship or employed in business are listed as unemployed. Persons fully laid-off but not full-time students are also categorised as unemployed in the Employment Service Statistics. The Labour Force Survey of Statistics Finland has a stricter definition for being unemployed: a person is unemployed if he or she has actively sought employment during the preceding four weeks and is available for work over the coming two weeks. The figures of the Labour Force Survey of Statistics Finland are internationally comparable and thus they are the official Finnish unemployment statistics.

Links:
Employment Bulletin of the Ministry of Economic Affairs and Employment