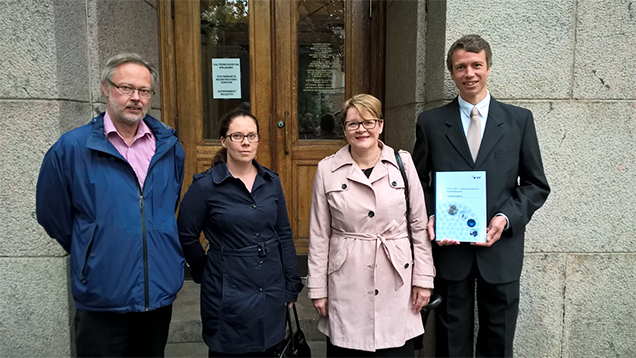 On 20 June 2017, VTT Technical Research Centre of Finland Ltd submitted an application addressed to the Government to decommission the FiR 1 research reactor in Otaniemi. FiR 1 has been in use since 1962 for research, teaching and isotope production and, in its latter years, also for cancer treatments.

Developed in the United States especially for a university environment, FiR 1 is a TRIGA type reactor which has a low fission power of 250 kW.

Processing the licence application now submitted includes a consultation round in accordance with the Nuclear Energy Act, (990/1987 as amended). The consultation round will begin later in the summer. To prepare the licence decision, the Ministry of Economic Affairs and Employment will request statements from several ministries and certain other authorities and organisations.

The intention is to complete decommissioning by 2022 provided funding for the project is arranged as planned. The spent fuel will be removed from the reactor and the radioactive parts of the reactor will be dismantled. The reactor hall and associated buildings will be decontaminated and released from regulatory control with no restriction on their use for other purposes.

Once the nuclear fuel has been removed, work will start on dismantling the structures in 2019-2022, after which the demolition waste will be removed to interim storage around 2020-2022. The research reactor facilities would be ready to be handed over for other use in the mid-2020s. It is estimated that the demolition waste would be finally disposed of in the 2030s.

VTT aims to return the spent nuclear fuel to the United States and a return agreement was made in conjunction with acquisition of the reactor. Whereas this agreement is valid until 12 May 2019, it is not currently certain that the State of Idaho will accept the spent fuel. The second option is to finally dispose of the spent fuel in Finland.

FiR 1 is the first nuclear reactor  to be decommissioned in Finland. Several test reactors of a similar type have been decommissioned elsewhere in the world and the lessons learned will be applied also when dismantling the Otaniemi reactor. Experiences gained from Otaniemi can in future be applied when preparing to decommission commercial nuclear power plants in Finland.

Safety will be an absolute priority in planning and decommissioning. All decommissioning measures will be carried out under the supervision of the Finnish Radiation and Nuclear Safety Authority (STUK). The radiation dose to which outsiders are exposed as a result of dismantling, transporting and storage during decommissioning should be indistinguishable from natural background radiation.