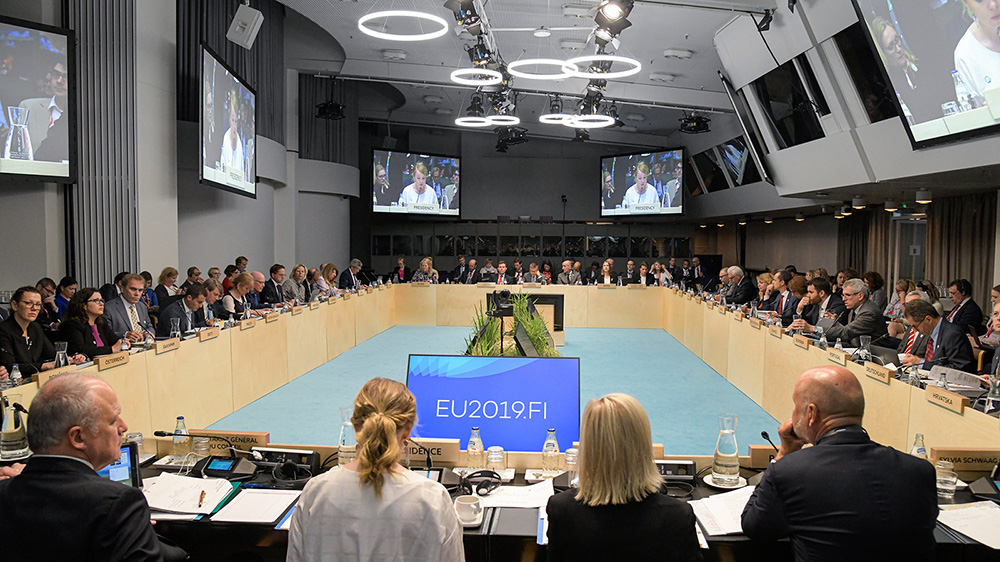 The main topics on the first day of the Informal Meeting of Ministers Responsible for Competitiveness were research and innovation policy and the upcoming Horizon Europe programme. The discussions provide input for further work on the sustainable growth agenda, which is one of the priorities of Finland’s Presidency of the Council of the European Union.

The ministers convened in Helsinki on 4 July. The meeting was chaired by Minister of Economic Affairs Katri Kulmuni. In addition, Commissioner for Research, Science and Innovation Carlos Moedas participated in the meeting. The informal meeting will continue on 5 July.

Research and innovation are an integral part of European growth agenda

Economic growth in Europe is facing a number of critical challenges, such as the digital transformation, rapid technological development, international competition and climate change. The EU’s research and innovation policy is an important tool to respond to these challenges and to turn them into opportunities.

“Sustainability, in particular the mitigation of climate change, is becoming a central driver for global competitiveness and the wellbeing of citizens. Sustainability is, for this reason, a major priority for our Presidency. Europe needs to embrace the transformational effects of research and innovation to decarbonise the economy and to take the competitiveness of European industry to the next level,” said Minister of Economic Affairs Katri Kulmuni.

“One of the key findings of our discussion is that the EU’s research and innovation policy should be embedded as an integral, horizontal part of the future European growth agenda. Today's discussion provided valuable input for the preparation and implementation of an EU innovation-led sustainable growth agenda beyond 2020,” Kulmuni continued.

Horizon Europe as a strategic tool

Ministers discussed a mission-oriented approach in the upcoming Horizon Europe programme, the EU’s framework programme for research and innovation. The European Commission has proposed a budget of around €100 billion for the programme for 2021₋2027. The programme is designed to generate new knowledge and technologies, promote scientific excellence, create social and environmental impact and contribute to growth and jobs. It aims at bringing research results to market more quickly and scaling up innovations.

Professor Mariana Mazzucato from the Institute for Innovation and Public Purpose, University College London gave a keynote speech to the ministers on one of the main initiatives of the programme, the mission-based approach. Through funding specific missions, Horizon Europe will direct research and innovation towards solving the pressing global challenges of our time, such as cancer, climate change, healthy oceans, climate neutral cities and soil. The European Commission officially launched the work of the missions and nominated chairs for them on 4 July.

“Mission-based research constitutes an exciting new addition to Horizon Europe which will be one of the world’s biggest publicly funded research and innovation programmes. The new missions will have the potential to bring about better and more visible results for complex challenges and to promote innovation-led transitions towards sustainability. I’m happy that the Commission announced the chairs for the mission boards at the time of our meeting in Helsinki,” said minister Kulmuni.

Messages for growth policy for the next five years

In addition to Professor Mazzucato, the keynote speakers of the meeting were professor Sylvia Schwaag Serger from Lund University, CEO of Vaisala Group Kjell Forsén, and CSO and co-founder of ICEYE Pekka Laurila.

The outcome of discussions in Helsinki will contribute to the preparations for the Competitiveness Council meetings in September and November 2019. The aim is to define the key policy messages of the Competitiveness Council for the new European Commission in the field of growth and competitiveness for the next five years. The Finnish Presidency emphasizes that the EU needs a growth agenda to become more competitive in global markets and ensure that growth is sustainable, both environmentally and socially.