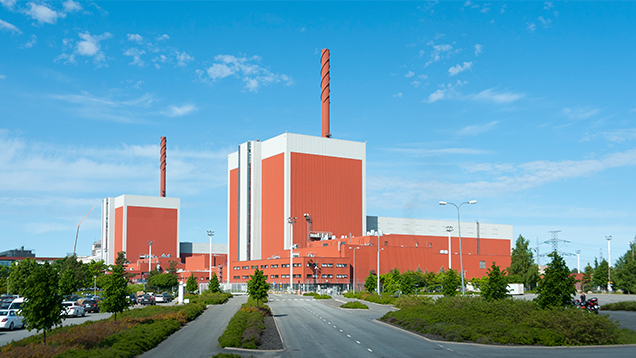 Finland has four active nuclear reactors with a combined gross output of 2,794 MW. In total, the power plants produce more than 20 TWh of electricity in a year (22.6 TWh in 2021).

Fortum Power and Heat Oy have two pressurised water reactors, Loviisa 1 and Loviisa 2, located in the Loviisa nuclear power plant. Each reactor has a gross output of 507 MW. The units were commissioned for commercial use in 1977 and 1981.  Their current operating licences expire in 2027 and 2030.

Teollisuuden Voima Oyj (TVO) has two boiling-water power plant units Olkiluoto 1 and Olkiluoto 2, on Olkiluoto island in Eurajoki. Each unit has a gross output of 890 MW. The units were commissioned in 1979 and 1982 and their current operating licences expire in 2038. There will be a third nuclear power unit in Olkiluoto, Olkiluoto 3, with a capacity of approximately 1,600 MW. It is expected to be operational in 2022. The unit is a pressurised water reactor.

VTT Technical Research Centre of Finland is preparing the decommissioning of its research reactor (FiR 1) in Otaniemi, Espoo. The reactor was shut down in 2015. In 2021 the Government granted VTT a licence to decommission and dismantle the research reactor.

Nuclear fuel is not manufactured in Finland; instead, all nuclear fuel used in facilities is imported. Power plants acquire fuel commercially, but STUK grants the licences for importing fuel as well as approves of the fuel consignments.

In February 2020, the government granted Terrafame Oy a licence to recover uranium from ore in the Sotkamo mine. Uranium is a side product in a nickel mine, in which the metals are extracted as suitable combinations from ore on the mine site, to be processed into products. The recovered uranium is natural, and it must be chemically processed and the uranium isotope enriched (uranium isotopic enrichment, in which the enriched U-235’s share is increased in proportion to U-238) before it can be refined and used as nuclear reactor fuel.

The uranium recovery facility in Sotkamo is not a nuclear facility, but the recovery of uranium is considered use of nuclear energy under the Nuclear Energy Act and therefore requires the government’s licence. The Radiation and Nuclear Safety Authority supervises the recovery facility.