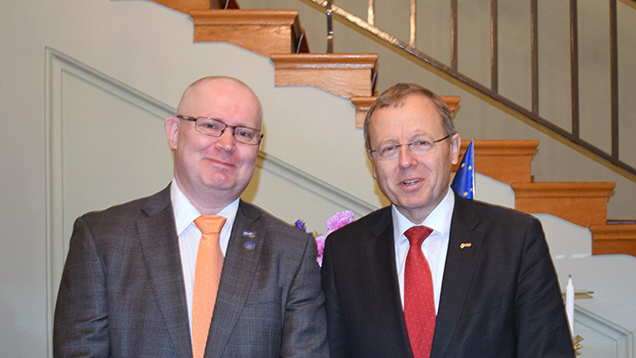 Johann-Dietrich Wörner, Director General of the European Space Agency (ESA), is visiting Finland today, 8 June. The decision to open an ESA Business Incubation Centre (BIC) in Finland will be announced during his visit. On Thursday morning, Wörner met with Minister of Employment Jari Lindström and Finland’s ESA delegates.

“From Finland’s perspective, it is important to discuss ways in which Finnish companies can become more involved in ESA’s activities and partnering networks. The Business Incubation Centre and Arctic cooperation will create new opportunities for Finnish companies and research organisations,” says Director General Ilona Lundström from the Ministry of Economic Affairs and Employment.

DG Wörner gave also an address on the space industry and took part in a panel discussion in a seminar at Helsinki Observatory hosted by the Ministry of Economic Affairs and Employment in partnership with AFDA, the Association of Finnish Defence and Aerospace Industries.

“We in Finland have a very high level of space expertise, coupled with a competitive, internationally networked space industry. Wörner was interested in our expertise and objectives, and also in the SME perspective that we raised,” notes Veera Sylvius, chairperson of AFDA’s space group and managing director of Space Systems Finland Oy.

In the afternoon, Wörner visited the Finnish Meteorological Institute, where he met the Institute’s management and Arctic research experts. The topics here were Finland’s chairmanship of the Arctic Council and ESA’s Arctic programmes. He also met with Pekka Soini, Director General of Tekes – the Finnish Funding Agency for Innovation.

Opening an ESA Business Incubation Centre in Finland is an important complement to Finland’s innovation system and will help spawn new companies in the sector. The Centre will launch in the autumn on the Otaniemi campus of Aalto University with involvement also from the cities of Helsinki and Espoo as well as Turku Science Park.

Finland’s strength in space collaboration is Arctic expertise. Finland supports the incorporation of an Arctic dimension in ESA’s initiatives and was instrumental in setting up the ESA’s Space & Arctic Task Force. ESA’s activity in Arctic matters ties in naturally with Finland’s two-year chairmanship of the Arctic Council which began in May this year.

Under ESA’s industrial policy, member states receive a geo-return on their contributions in the form of ESA contracts going to their own firms and research organisations. Contracts received by Finland are currently below the target level. Corrective measures to be taken regarding the geo-return will also be discussed during the Director General’s visit.