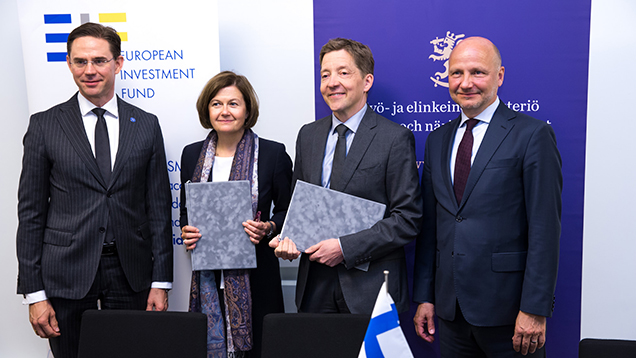 The European Investment Fund invests EUR 10 million in an experiment aimed to find jobs for 2,500 immigrants in Finland within three years, while helping employers find the skilled labour they need.

In the experiment, implemented by the Ministry of Economic Affairs and Employment, the employment of immigrants is promoted through private investment. The SIB (Social Impact Bond) model of impact investing is to be used in the experiment.

– What is new in the SIB model is that the activity is financed by the investors who also bear the financial risk. The public sector pays for the proven outcomes only – that is, when an immigrant finds a job, says Jari Gustafsson, Permanent Secretary at the Ministry of
Economic Affairs and Employment.

– The Investment Plan for Europe and the European Fund for Strategic InvestmentS (EFSI) included in it are innovative tools to get investment moving in Europe. Today’s contract is indicative of the growing role of EFSI in promoting societal projects, in this case concerned with the integration and employment of immigrants. The project is the first of its kind in Europe, and we will follow its impact very closely as we hope it may serve as a model for others. I wish the best success to all who benefit from the education, training, apprenticeship and employment opportunities offered by the project, says Jyrki Katainen, European Commission Vice-President responsible for jobs, growth, investment and competitiveness.

Immigrants’ unemployment has for years been 2 to 5 times higher than that of the native population, and it takes much more time for them to enter the labour market. In the experiment the employment of immigrants is facilitated by bringing training to workplaces and customising it according to what is needed to do the job.

– Immigrants who find employment strengthen the viability of municipalities and Finland’s economic growth. With the growing numbers of immigrants, it is even more important than before to facilitate their entry to the labour market, Permanent Secretary Gustafsson says.

The companies participating in the experiment represent sectors that have difficulties in finding workforce, such as the manufacturing industry, building, trade and services. The experiment is first carried out in Uusimaa and Southwest Finland, and it will be extended to regions where there is a shortage of labour as considered necessary.

– Valmet Automotive is currently recruiting large numbers of employees. In this situation it is important to find people who are motivated and committed to their work. Immigrants are one of the groups of people where we have found such employees, and I believe we will find more of them in the future. The SIB project improves the basis employment skills of immigrants to facilitate their entry to working life. The way we see it, we also have an important role in supporting the integration of immigrants by employing them, says Tomi Salo, HR Director of Valmet Automotive.

The Social Impact Bond model was brought to Finland by the Finnish Funding Agency for Innovation Sitra. In the SIB project the performance objectives are specified in great detail, both for the wellbeing set as the target and for the economic benefit. The achievement of the targets is measured on a regular basis.

– The experiences gained from the Integration SIB project will also be used in the future Employment SIB project, specifically aimed to promote the employment of the young and long-term unemployed, Permanent Secretary Gustafsson says.

The Government decided on the Employment SIB project in the mid-term policy review, and it is to start in the autumn.