Team Finland to overhaul its services and operating models 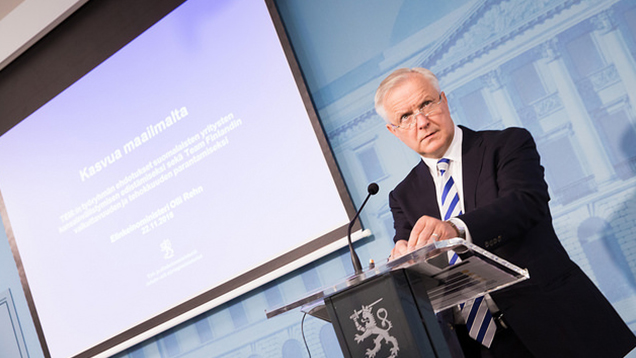 Team Finland’s operations will be reorganised in two stages. First, measures that can be implemented within a short timeframe will be carried out. Next, the Team Finland working group will assess the potential for structural reforms that the Government will decide upon in its mid-term review in April 2017.

The immediate measures include the following:

“The working group focused primarily on the services required by SMEs looking for international expansion. Current problems with these services include an ambiguous and excessively broadly defined service promise, a muddled and multi-tiered management system and the fragmented structure of the business services. Moreover, cooperation between the various actors is not working as well as it should,” says Minister of Economic Affairs Olli Rehn commenting on the government policy at the press conference held in Helsinki on 22 November 2016.

To clarify the system of operative management, the current Team Finland Steering Group led by the Prime Minister’s Office will be abolished and oversight of the activities will be assumed by the Ministry of Economic Affairs and Employment on a centralised basis. The new steering group to be chaired by the Permanent Secretary of the Ministry of Economic Affairs and Employment will include representatives from the Ministry for Foreign Affairs, the Finnish Funding Agency for Innovation Tekes, the Confederation of Finnish Industries, the Federation of Finnish Enterprises and the Finland Chamber of Commerce. The steering group is tasked to initiate the immediate operational reforms recommended by the working group and take other steps to develop more integrated and customer-responsive service models to be adopted by counties, the central government and abroad.

“We shouldn’t paint too dark a picture, though. After all, cooperation between different parties has improved, Team Finland has contributed to foreign investments in Finland, and as far as tourism is concerned, the wind is in our sails and things are looking up. Among the positive signs are the investments in Finnish tourism by Alibaba of China and international recognition of Finland as an attractive tourist destination in many forums,” Rehn points out.

Potential for structural reforms to be reviewed

In the second stage, the working group will assess the need for any strategic oversight mechanism for Team Finland at the Government level and explore various options for organising the activities. Additionally, the working group will assess the possibilities for integrating the activities of Tekes and Finpro and the division of duties between foreign networks as well as joint management of human resources. At the same time, the working group will evaluate the adequacy of the resources available for export promotion purposes and submit, if appropriate, a proposal for increasing these resources. The proposal will be finalised by the time of the Government’s mid-term review.

Mykkänen: We will remove bottlenecks in key markets

Minister for Foreign Trade and Development Kai Mykkänen also considers the joint working group’s conclusions to be necessary and appropriate in all respects.

“Most of our export promotion resources abroad are located in the embassies. These missions already serve to support companies around the world. Export promotion must be brought more closely to the core of our missions’ responsibilities, as is the case in Denmark, and we must make sure that locally we really operate as a single team with Finpro. I have set up six assessment teams made up of local leaders of Finnish businesses with the task of putting forward ideas for how we can remove bottlenecks locally in the key markets,” says Minister Mykkänen.

Minister of Economic Affairs Olli Rehn appointed the working group on 6 October 2016 to prepare a proposal for improving the impact and efficiency of Team Finland activities. The Government reviewed the working group’s interim report at its strategy session on 21 November 2016. The working group is chaired by Permanent Secretary Jari Gustafsson of the Ministry of Economic Affairs and Employment. The other members are Special Advisor Anna-Kaisa Heikkinen (Prime Minister’s Office); Director General Markku Keinänen (Ministry for Foreign Affairs); Chief Executive Officer Mikael Pentikäinen (The Federation of Finnish Enterprises); Director General Jyri Häkämies (Confederation of Finnish Industries); and Director of Finance Mika Niemelä (Ministry of Economic Affairs and Employment) who serves as secretary to the working group.