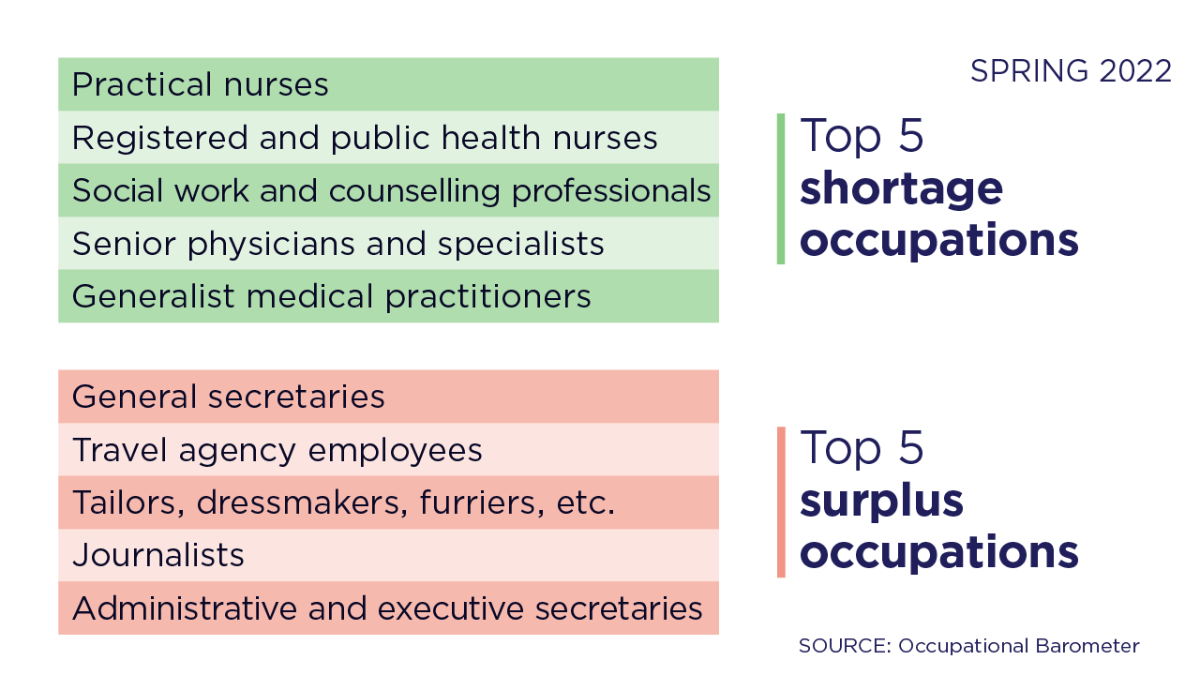 "The results of the Occupational Barometer reveal that we have both a shortage of labour and a problem with matching work and jobseekers. We must be able to deal with both problems efficiently in order to prevent the good pace of the economy from slowing down," says Minister of Employment Tuula Haatainen.

"We are working in broad cooperation to solve the problem of supply and demand in three different ways: with a project on a road map for labour in each sector, a reform of the digital Job Market and the TE Services 2024 reform. Of these, the Job Market will already be implemented in May and the proposals for the road map project will be completed by the end of the year," explains Minister of Employment Haatainen.

Read about the results of the Occupational Barometer in this press release.

The outlook on the availability of labour in the social welfare and healthcare sector has become slightly bleaker since the autumn. The shortage of practical nurses and registered nurses, who are at the top of the top-15 list, is severe and labour force in this field is widely needed in the entire country. The volumes of the demand are also high. Towards the end of 2021, there were on average 8,000 vacancies for practical nurses in employment services every month. Approximately 4,600 vacancies for registered nurses were advertised every month.

From surplus of workforce to labour shortage in the restaurant sector

Twelve months ago, the work prospects of restaurant and institutional catering workers  were limited and there was surplus of labour for these occupations. The situation has changed considerably in twelve months. There is now a shortage of workers in this occupation across the country. In several regions, the shortage has even been defined as severe.

This is because of a clear change in the demand for restaurant and institutional catering workers. While approximately 1,200 new vacancies for the occupation were reported to employment services every month during the worst stage of the coronavirus epidemic at the beginning of 2021, their number has been as high as approximately 3,200 per month at the beginning of 2022.

Shortage of supervisors in the construction sector re-emerges

The last time supervisors in the construction sector were in the top 15 list of the Occupational Barometer was in spring 2019.  Even after this, there has been some degree of shortage of competent workers in this occupation. However, there has been regional variation in the situation. It was estimated that there was a shortage of supervisors in the construction sector in about one half of the areas of the ELY Centres in spring 2021. The shortage was not considered to be severe in any of the areas. In the latest estimate, the shortage of supervisors has expanded regionally and there is already severe shortage in Häme and North Savo.

The volumes of supply and demand of supervisors in the construction sector are not as high as for restaurant workers, for example. Towards the end of 2021, employment services had approximately 600 vacancies for supervisors in the construction sector. At the same time, the number of unemployed people in the sector was approximately 700 in the register of employment services.

Only a slight decline in surplus occupations

The changes in the top-15 list of surplus occupations have been minor. There is still generally a surplus of labour, for example, in general secretarial occupations.

There is a great deal of surplus in occupations in the field of creative work and culture. In addition, there were more jobseekers than vacancies available in so-called traditional occupations, the demand for which has declined as a result changes in the industrial structures. These occupations include tailor, furrier, dressmaker and pre-press technician.

The most balanced labour market situation for occupations in Satakunta and Lapland, labour shortage increasing especially in Häme and Kainuu

According to the Occupational Barometer, Satakunta and South Savo had the best balance in the supply and demand for labour with regard to slightly over 200 occupations. According to the parties that carried out the assessments, Kainuu had the proportionally lowest number of occupations that were in balance in terms of supply and demand. In Kainuu, more than one half of the assessed occupations were defined to be suffering from labour shortage. It should be noted here that the labour market outlook of only some 140 occupations was assessed in Kainuu.

These results are revealed by the spring Occupational Barometer, which is based on the assessment of the relationship between supply and demand in slightly over 200 occupations in the near future, carried out by the Employment and Economic Development Offices (TE Offices) in between February and March 2022.