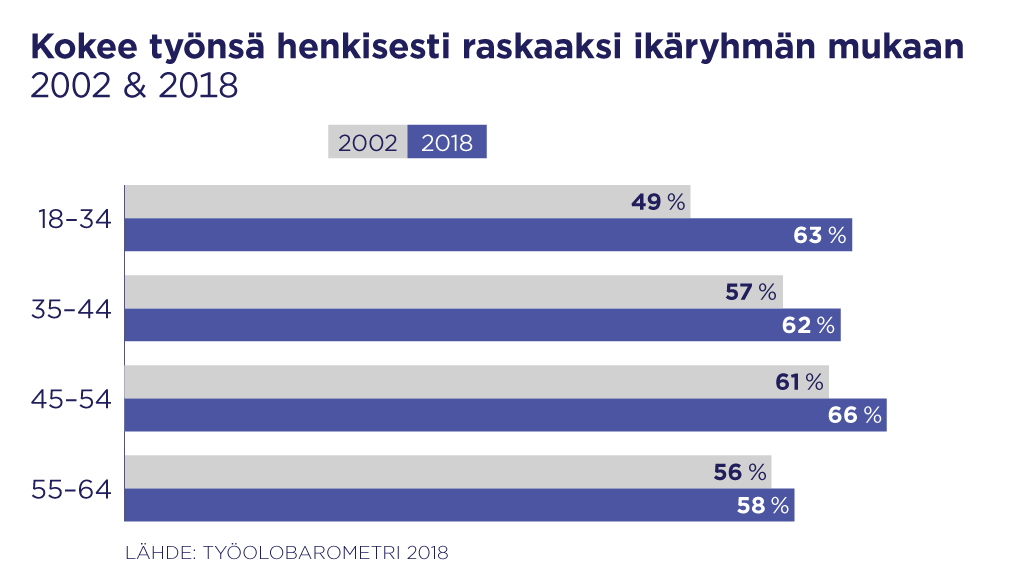 During the 2000s, the ability of the oldest employees to meet the physical and mental requirements of work has improved. Fewer employees aged 55-64 consider their work physically strenuous than before: 37% compared to 43% in 2002. Meanwhile a growing number of employees, especially the youngest, feel that the mental strain of work has increased.

The majority of employees find their work mentally exhausting, at least to some degree. More than a third find their work physically strenuous. Throughout the 2000s, there have been small changes in the level of stress experienced by employees. According to the final report of the working life barometer 2018, nine out of ten employees consider themselves well equipped to meet the mental or physical demands of work.

“Even though working life is changing dramatically, experiences of work have remained surprisingly unchanged. In terms of wellbeing at work, workplaces themselves, and most particularly management, have the greatest responsibility. With good management and good organisation of work, mental and physical stress will remain reasonable,” says Minister of Labour Timo Harakka, commenting on the results.

There are significant differences in the perceived strain of work between socio-economic groups and employees working in different sectors. Physical strain was experienced especially by manual workers and those working in the industry, and mental strain by office personnel. In the municipal sector, the number of people who consider their work both physically and mentally strenuous is higher than average.

“The changes in the youngest age group’s experiences of work are alarming. Their experiences of the stressfulness of working life require more detailed analysis and actions,” says Minister Harakka.

The working life barometer to be conducted in the autumn of 2019 will include more detailed questions about burnout and about joy and enthusiasm at work. The minister promises this information will be available next year.

He also points out that the youngest age groups are more optimistic in their expectations on the development of working life.

“Workplaces should identify means of responding to the expectations of employees of different ages and of engaging them in workplace development efforts,” Harakka notes.

In the youngest age groups, special attention should be paid to induction training, supervision, and work–life balance. There are various forms of support available to employers, such as information on solutions adopted in other workplaces, and support to their own development activities.

Workload is considered excessive more often in the public sector than in the private sector, by as many as a quarter of employees in central and local government. Working according to tight schedules or at a very rapid pace is common: 36% of all wage and salary earners reported doing so daily and one third weekly.

In the local government sector, as many as 42% of wage and salary earners reported working at a fast pace every day. The pace of work is also considered hectic in the private service sector (37%).

Participation, competence development and a safe working environment are the strengths of Finnish working life. According to the working life barometer, progress has been made in these areas over a longer period.

If we are to achieve a high employment rate, workforce will become more diverse.

“Diversity is an asset that we should tap into,” Minister Harakka points out.

“There is much room for improvement in the quality and productivity of working life. The world of work is in transition, and advanced technology is rapidly changing work. In these circumstances, we must take action to ensure no-one is left out. It is essential that workplaces are able to benefit from the skills and ideas of all employees,” he emphasises.