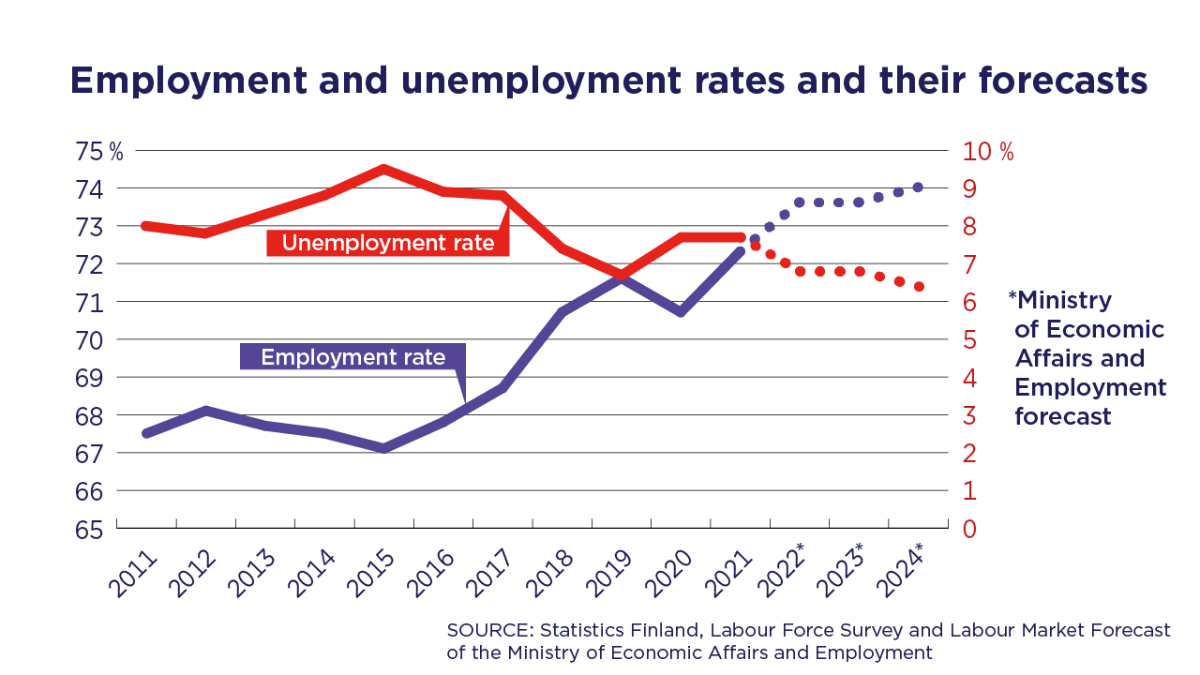 Even though the outlook for the labour market is in many respects gloomier than before, the number of employed persons will continue to grow slightly, according to the Labour Market Forecast extending to 2024. The number of unemployed jobseekers in employment services (TE services) will see a moderate increase as well.

The information is based on the short-term labour market forecast published by the Ministry of Economic Affairs and Employment on 9 November 2022. This time, the energy shortage caused by Russia’s war of aggression, integration of Ukrainian refugees into the Finnish labour market, and the risk of weakening purchasing power create uncertainty in the forecast.

“Finland will benefit from the increased labour force that the Ukrainian refugees bring. Our employment and education systems will now be put to a test to see how well they can supply skilled workforce to employers that suffer from labour shortages,” says Elina Pylkkänen, Under-Secretary of State at the Ministry of Economic Affairs and Employment.

“The labour force participation rate of Finland’s working age population is lower than in the other Nordic countries, but it is predicted to rise annually over the forecast period. Another good news is that the employment rates in the youngest and oldest age groups have risen quickly in the past few years. Nonetheless, work still remains to be done to reach an employment rate of 80%,” Pylkkänen says.

As Ukrainian refugees have the right to receive a municipality of residence, they will be included in the official employment and unemployment rate starting in 2023. This will have a significant impact on all forecast results. Some of them have already registered as unemployed jobseekers with TE services.

While the challenges related to the availability of labour may ease, they will not disappear completely. Employment among older people aged 65–74 has risen strongly in recent years, and this growth is estimated to continue. A larger proportion of older people and retired people are working, which helps alleviate the shortage of labour.

The number of unemployed jobseekers registered in TE services is not falling at the moment and it is expected to start rising again in 2023. Meanwhile, the decrease in long-term unemployment will continue for now, but stagnate in 2024.

The labour force participation rate will increase, mostly due to shrinking age groups. Expanding the labour force will mainly be possible by increasing immigration during the forecast period.

The short-term labour market forecast of the Ministry of Economic Affairs and Employment is based on a statistical time-series analysis that makes use of economic indicators, labour market statistics and policy information, as well as the Ministry of Finance’s GDP forecast and the demographic forecasts of Statistics Finland. The forecast is published twice a year.

Email-addresses of the ministery are in form [email protected]