Labour market forecast: Employment to exceed pre-coronavirus level this year but unemployment to fall below that level only in 2023 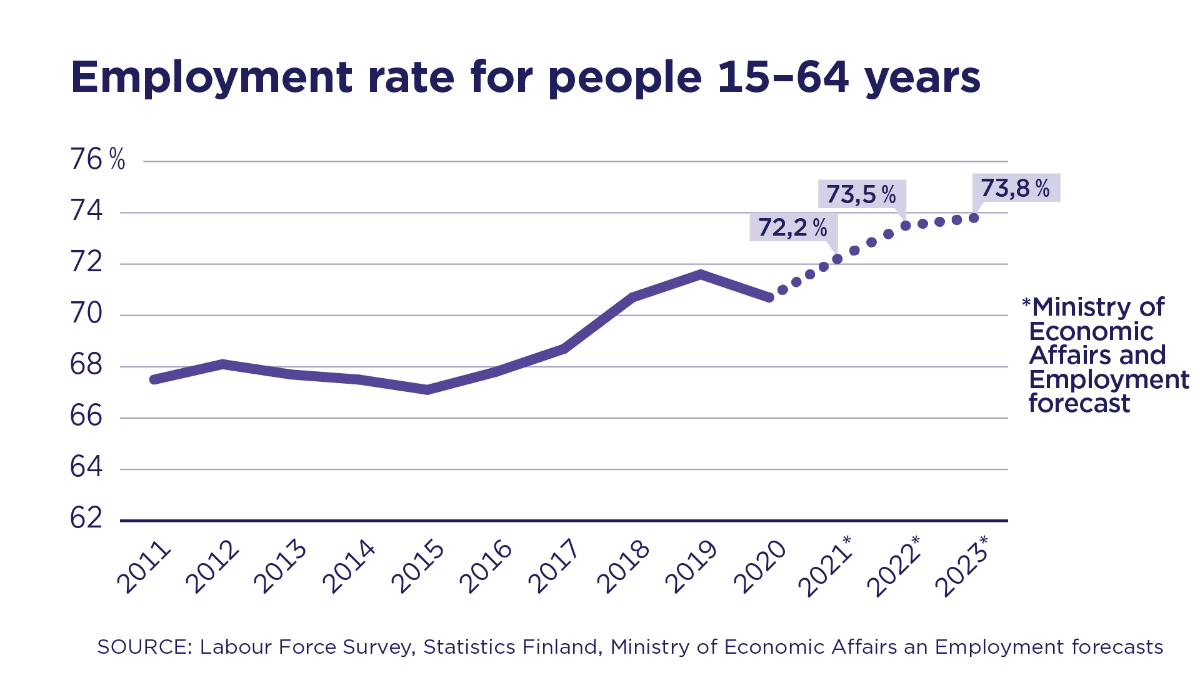 Already this year, the employment rate will increase beyond the level that existed before the coronavirus epidemic. The rapid recovery of the economy and employment surprised the forecasters in the summer. The Ministry of Economic Affairs and Employment has also revised its forecast upward.

The information is based on the labour market forecast extending to 2023, which was published by the Ministry of Economic Affairs and Employment on 9 November 2021. The forecast is based on the assumption that the restrictive measures are largely over and that the economic recovery will continue. However, the risk that restrictive measures will be reintroduced creates some uncertainty.

The upbeat mood has encouraged people to enter the labour market and the proportion of the working-age population currently in labour force is at its highest since the financial crisis of 2008. According to the forecast, labour market participation rate will rise to 68% in 2023, which is significantly higher than the 65.8% recorded before the start of the pandemic in 2019. In addition to the positive economic trend, labour market participation rate is boosted by a strong growth in the number of older people in the labour force, a decline in the population and increased part-time work.

The number of registered unemployed jobseekers at TE Offices (including those laid off) will shrink rapidly in the coming years and will fall below the pre-coronavirus level in 2023. This trend is particularly positive in youth unemployment (those under 25 years of age). The number of laid-off workers is expected to fall to the normal level by next spring. The number of long-term unemployed has reached a top high and they make up more than 40% of all registered unemployed jobseekers. However, the number of long-term unemployed started to decrease faster than previously estimated in the summer and the steady downward trend is expected to continue.

“The number of unemployed jobseekers will not return to the pre-coronavirus crisis level as quickly as the employment rate. Meanwhile, the number of long-term unemployed is now exceptionally high and expected to recover slowly. While a great deal of part-time employment relationships have been created, many of those who have lost their full-time permanent jobs are still without work. However, the labour market forecast shows that during 2023 we will be very close to the Government’s employment target of 75% based on the old calculation method,” says Elina Pylkkänen, Under-Secretary of State at the Ministry of Economic Affairs and Employment.

“Youth unemployment seems to fall rapidly, which is a very positive sign. This will enable long working careers that in turn will alleviate our sustainability gap. Above all, this is the cornerstone of optimism about the future of young people. The availability of labour, on the other hand, has again become a key obstacle to employment growth. I expect that the Nordic labour market service model, which will enter into force in May 2022, will improve the allocation of labour to open vacancies,” Pylkkänen adds.

The short-term labour market forecast of the Ministry of Economic Affairs and Employment is based on a statistical time-series analysis that makes use of economic indicators, labour market statistics and policy information, as well as the Ministry of Finance’s GDP forecast and the demographic forecasts of Statistics Finland. The forecast is published twice a year.

The short-term labour market forecast of the Ministry of Economic Affairs and Employment, autumn 2021 (in finnish)
Government employment measures and their impacts
The presentation of the press conference (pdf in Finnish).
Share on Facebook Share on Twitter Share on LinkedIn | Print Email
Back to top