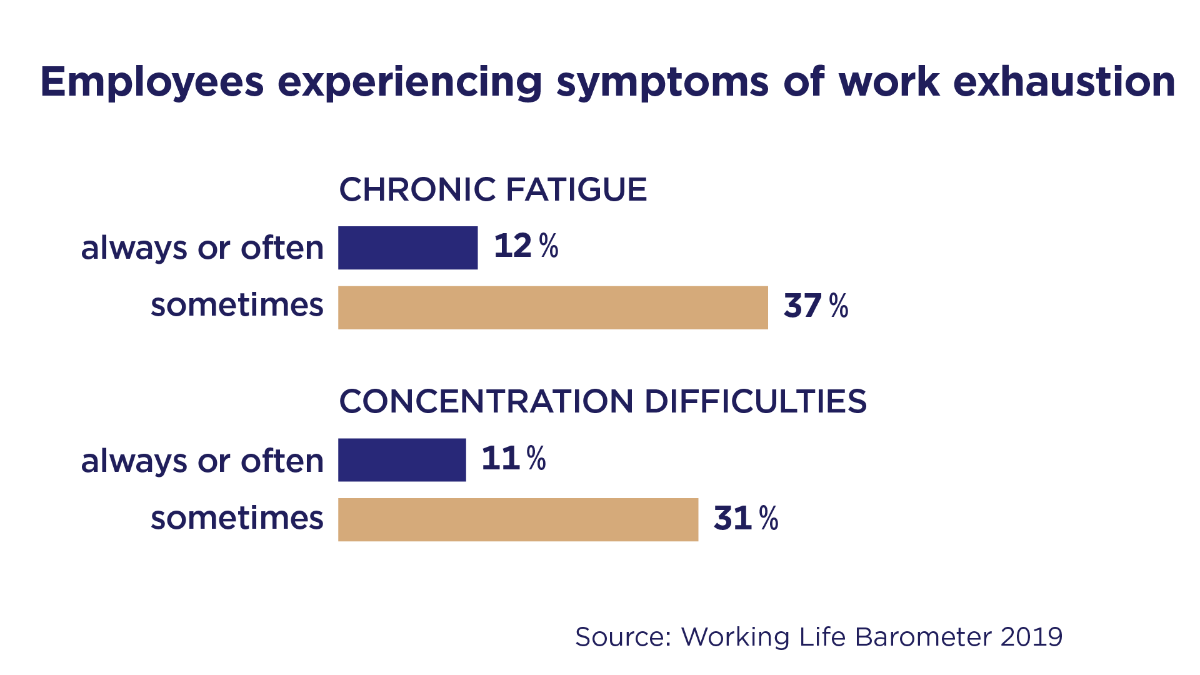 Digitalisation and increase in knowledge work are reflected in working life. According to the Working Life Barometer 2019, working in haste was normal for many wage and salary earners, with almost one-third of them working in haste on a daily basis.

More wage and salary earners than before considered their work mentally strenuous and close to a half of them experienced harmful stress at work. On the other hand, the majority of wage and salary earners experienced engagement – enthusiasm, drive and immersion – in their work. These are the conclusions of the Working Life Barometer published by the Ministry of Economic Affairs and Employment on 10 November 2020.

“In many ways, today’s working life requires much more from employees than before. From the perspective of extending careers, it is essential that people can handle working life. By developing skills and the way we work we can promote both wellbeing at work and longer careers,” says Minister of Employment Tuula Haatainen.

Despite the occasional strain of work, the majority of wage and salary earners had experienced a positive feeling of engagement in their work. In 2019, most wage and salary earners reported feeling enthusiasm (64%) and drive (63%) in their work. In addition, more than half (56%) had experienced immersion in the work. Gender, age or socio-economic status had surprisingly little impact on the experience of work engagement. Employees in the municipal sector felt work engagement most often.

“This feeling of engagement is a good example of how successfully developing working life has increased well-being at work and at the same time improved productivity. Employees who are engaged in their work feel better in general and are more productive. This, in turn, plays an important role in the success of organisations,” Minister of Employment Haatainen adds.

The segregation of working life, that is the division of the labour market into male-dominated and female-dominated sectors, is also reflected in working conditions. According to the Working Life Barometer, women are systematically less able to influence their work than men are. Women have less flexibility in their working hours and they experience more harmful haste, mental strain and physical violence than men. Women were also more dissatisfied with the incentive offered by their pay than men.

“Gender equality must be promoted in all circumstances, both during and after the coronavirus crisis. However, the inequalities in working conditions will not be resolved overnight. We need broad-based action. Among the most important measures is the family leave reform, which aims to divide the responsibility of child care in families more evenly,” Minister Haatainen says.

The coronavirus epidemic does not show in the results of the Working Life Barometer 2019.  However, the results of the barometer provide a comprehensive picture of how wage and salary earners experienced working life just before the start of the epidemic.

“The coronavirus crisis will accelerate the structural changes in working life. There has been a shift to remote work and general uncertainty has increased. These changes should be carefully examined. The epidemic will be reflected in next year’s Working Life Barometer. The 2019 barometer will serve as an important basis for examining the results of next year,” adds Haatainen.

What is the Working Life Barometer?

Conducted since 1992, the Working Life Barometer is a sample study that examines the development of the quality of working life from the viewpoint of Finnish employees. The data for 2019 are based on telephone interviews conducted by Statistics Finland in August and September in connection with the Labour Force Survey. 1,555 wage and salary earners responded to the barometer study in 2019. The data can reliably be generalised to apply to employees everywhere in Finland and in all sectors.