Business agreements will boost exports and investment between China and Finland 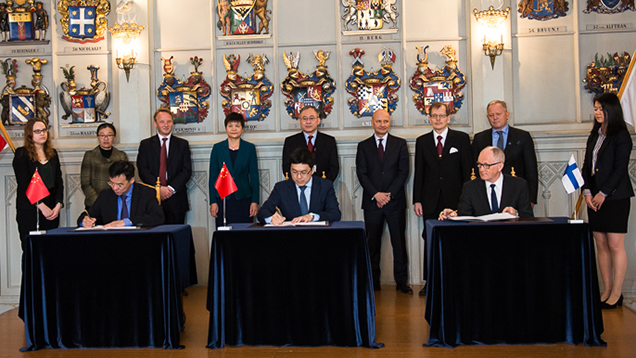 On Wednesday 5 April 2017, Permanent Secretary Jari Gustafsson from the Ministry of Economic Affairs and Employment hosted a signing ceremony in Helsinki, the aim of which was to advance and promote Finnish exports and job-creating foreign investment in Finland at a practical level. A number of new agreements on cooperation involving Chinese and Finnish businesses and public sector organisations were signed at the ceremony.

The range of agreements on cooperation signed here today says a lot about the way in which the Finnish and Chinese economies are complementary to each other, and about how Chinese investors have discovered Finland at last. What makes Finland interesting to the Chinese is its potential as a product development hub, based on our high level of competence and innovation, and the country’s position as a gateway to the European market. For Finns, China’s expanding middle class and transformation into an ever more consumer-driven economy offers opportunities to do business, for instance in tourism, winter sports and the food industry,” says Permanent Secretary Jari Gustafsson.

At the ceremony, greetings from the Chinese Government were conveyed by Economic and Commercial Counsellor Sun Liwei from the Embassy of the People’s Republic of China. As a result of sustained efforts by different ministries, Finpro, Tekes – the Finnish Funding Agency for Innovation, and others, doors were opened to cooperation in new fields.

“I am very pleased that we have been able to sign several memoranda of understanding with our Chinese partners, which will further strengthen trade relations between our two countries in many areas. For example, we are seeking to combine the financial strength of the Chinese market and Finnish innovative enterprises, to build air routes between Finland and East China as well as work together to explore opportunities in the education, bioeconomy, cleantech and ICT sectors,” says Finpro CEO Markus Suomi.

The meeting also included the release of a memorandum of understanding signed by Tekes Director General Pekka Soini on closer cooperation between China’s Ministry of Science and Technology and Tekes.

“We believe that this new memorandum of understanding will strengthen our cooperation and lead to win-win projects and new business concepts, especially in IoT, medical science, smart and flexible energy and intelligent transportation, including MaaS, Mobility as a Service. We would also like to start together new development platforms which drive future business, solving big social and environmental challenges, for example preparing for the Beijing Olympics in 2022,” says Pekka Soini, Director General of Tekes.

The signing of the agreements was timed to coincide with the state visit of the President of the People’s Republic of China, Xi Jinping. In connection with the meeting of the two presidents, the opportunity was taken to deepen cooperation between China’s Ministry of Commerce and Finland’s Ministry of Economic Affairs and Employment. In the presence of the two country’s presidents, Minister of Economic Affairs Mika Lintilä and Minister of Commerce Zhong Shan signed a joint statement establishing a Committee for Innovative Business Cooperation with the purpose of promoting cooperation between Finnish and Chinese companies.

Agreements and memoranda of understanding signed at the event:

The following documents signed in advance were also announced at the ceremony: