Peaceful meeting of the Committee for Peaceful Use of Space

Within the UN space matters are handled by COPUOS, the Committee for the Peaceful Use of Outer Space, established in 1959.

All the UN Space Treaties of the 1960s and 1970s were prepared by COPUOS, and this is where the discussion on topical space themes takes place. Over the years no new Space Treaties have been concluded, but the committee has prepared several non-binding UN resolutions on key topics relating to the use of space and research. The committee convenes in varying compositions three times a year: Science and Technology Sub-Committee in January-February, Legal Sub-Committee in March-April, and the Plenary Session in June. 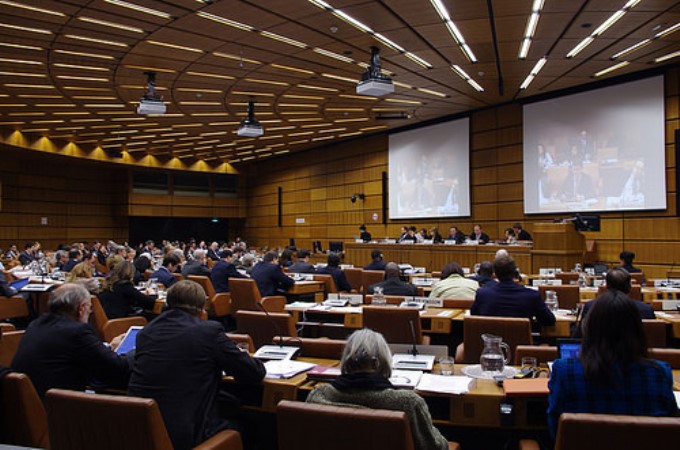 The committee has 84 members. Finland is not a member, but joining in has been considered on several occasions. Now that space activities are growing in Finland and we are preparing space legislation of our own, membership in COPUOS would be well justified. At the end of March we had the opportunity to attend the Legal Sub-Committee meeting in Vienna as observers. The meeting lasts for two weeks, but the three days we spent there were most interesting.

The discussion was extremely well prepared and polite, almost meditative. It started by general remarks, moving gradually to comments on more concrete issues and proposals for solutions. The discussion on each theme went on for days in order for every member to have time to prepare their contributions. Three themes stood out clearly.

To mine or not to mine

It is typical for the COPUOS Legal Sub-Committee meeting to start with a seminar on topical issues in space law. This year’s theme was space mining. There are already great expectations regarding this, even if we do not yet have the necessary technologies and the financial aspects are very much open. The discussion on this theme continued throughout the three days we were present. The member states are particularly worried about how to ensure the equitable use of the natural resources in space. Many of those present called for international rules to guarantee that the operations are safe, space debris is minimised, and the use of space is on a sustainable basis. People were very much interested in whether space mining should be considered as free exploration and use allowed by the Outer Space Treaty, or whether it would be occupation of celestial bodies, which is contrary to the Treaty. Luxembourg and the United States, as the only countries with legislation on space mining, stressed that their national legislations fully comply with the Outer Space Treaty. There was a broad consensus that the discussion at the committee must be continued.

Meetings of the Legal Sub-Committee have been held for more than 50 years. This is also how long the issue of where space begins has been on the agenda. Space has not been defined in any Space Treaty and, as to the need for a definition, there are opinions both for and against it in legal literature. This is also what we saw at the meeting. Some member states consider that a definition of where air space ends and outer space begins, in particular, is important because of space tourism and other activities extending almost to space. However, some of the member states pointed out that we have done quite well without such definitions and this has caused no problems so far. The discussion will continue next year, and nobody seems to expect a concrete outcome.

COPUOS is the most significant international cooperation body, providing the framework for the preparation of international practices concerning the use and protection of space. Now that Finland will be among the countries that have launched satellites to space, it is even more important to participate in the discussions on the principles governing the space operations. This is why membership in COPUOS would be important for us.

Maija Lönnqvist is a Senior Legal Counsel at the Enterprise and Innovation Department of the Ministry of Economic Affairs
and Employment. She is the secretary of the working group preparing the national space legislation. She is also
a Finnish delegate to the Administrative and Finance Committee of the European Space Agency ESA.