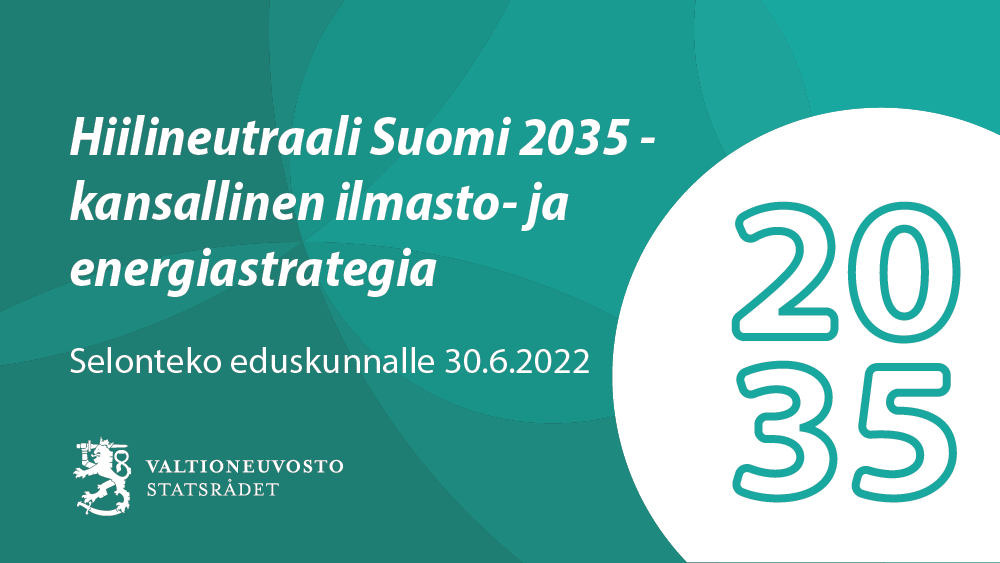 On 30 June 2022, the Government submitted its national climate and energy strategy to Parliament as a report. The strategy is a comprehensive action plan for the medium term, which Finland will use to meet the EU’s obligations for 2030 and to achieve the national climate target for 2035. The strategy covers all greenhouse gas emissions in the emissions trading, effort sharing and land use sectors as well as the carbon sinks of land use and other sectors.

The strategy focuses on the green transition and the phasing-out of Russian fossil energy, the import of which has already ceased almost completely. The strategy includes policies on security of supply drawn up by the Ministerial Working Group on Preparedness led by Minister Saarikko. Other key elements of energy policy include the security and continuity of energy supply and competitive energy prices, which are essential for both energy users and economic growth.

According to the strategy, Finland can achieve its climate target by 2030 (a 60% reduction in total greenhouse gas emissions compared to 1990 level) and carbon neutrality by 2035 (emissions will not exceed the amount of emissions absorbed by carbon sinks). Finland is likely to achieve the objective of generating at least 51% of the final energy consumption from renewable sources by 2030. However, the EU’s new proposed target for Finland to reduce its end consumption of energy to no more than 250 TWh by 2030, is still open.

Three quarters of the greenhouse gases that warm the climate originate from energy production and consumption, including transport. Energy and climate policies are therefore closely linked, particularly as regards the promotion of energy efficiency and clean energy sources. To reduce the energy system’s dependency on carbon, investments in clean solutions have already been made in Finland for quite some time.

The emissions trading system and a predictable long-term climate and energy policy are key steering instruments of the strategy. A stable operating environment is important for investments, as are investments in new technologies. Companies make the investments, but public administration can facilitate them by improving operating conditions with clear and easy licencing rules and financial incentives.

The strategy addresses cross-cutting themes that play a key role in reducing emissions. These include:

•    electrification and use of system integration, which helps reduce emissions in sectors where this is otherwise difficult,
•    promoting non-combustion heat production,
•    tax treatment of waste heat (including data centres) and industrial-sized heat pumps,
•    increased market-based generation of land-based wind energy, offshore wind power demonstrations and investments in them, use of leased water areas in Finland’s territorial waters,
•    updating the 2020 sectoral low-carbon roadmaps in 2023, as applicable. The work to meet the targets has continued and many sectors have put the roadmaps into practice at company level.
•    Finland exceeded its binding energy saving obligation in the EU for 2014–2020 by a clear margin. Other energy saving targets were also achieved. The EU’s Fit for 55 package and the REPowerEU proposals will further tighten the energy efficiency targets for both absolute reductions in energy consumption and the cumulative energy saving obligation. Achieving these targets will become more difficult and expensive in future.
•    National hydrogen strategy, the hydrogen economy and electrofuels. Quantitative targets for hydrogen electrolysis capacity have been set. These can be exceeded if technological development is brisk.
•    Small modular reactors (SMR) built in serial production to replace fossil fuels in electricity and heat production.

According to the calculations in the strategy, additional funding of EUR 150 million will be needed in the coming years in energy aid for large demonstration projects in new energy technology from 2024 onwards, some of which will be used to promote the hydrogen economy. In addition, an increase of EUR 10 million to EUR 40 million in the budget authority on energy aid from 2024, and support for the promotion of low-carbon industry (aid may come through the Carbon Contracts for Difference) will be needed. Transport and distribution of hydrogen will also need additional funding, which will be included in the RRF funding from 2022 onwards. Approximately EUR 53 million has been reserved for the proposals of the Ministerial Working Group on Preparedness to increase the domestic supply of forest chips and EUR 1 million for energy advice for consumers each year.

To support the preparation of the strategy and climate policy plans, the report “Carbon neutral Finland 2035 – Environmental impact assessment of energy and climate policy actions,” funded by the Government’s analysis, assessment and research activities, was commissioned. In February 2022, a Follow-up report on Carbon neutral Finland was completed. This was necessary because the Government’s budget session in September 2021 adopted a number of new climate objectives that could not be assessed for the report published on 1 December 2021, due to time constraints. Several research institutes were involved in carrying out the studies.

During the preparation of the strategy, the impacts that the policies as a whole could have on the environment, gender, national economy and central government finances were assessed, as were social and regional impacts.