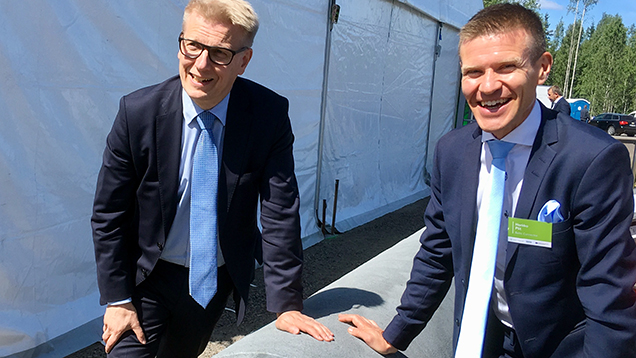 The Balticconnector pipeline, connecting Estonia and Finland, gives Finland the opportunity to open its natural gas market to competition. It also allows us to gradually join the European natural gas network and the EU’s common gas market,” Minister of the Environment, Energy and Housing Kimmo Tiilikainen said at the Balticconnector Groundbreaking Ceremony in Inkoo on 8 June 2018.

“The developing regional market will benefit all natural gas users in the eastern Baltic Sea region and open the Nordic power market to the Baltic states. The new pipeline will create more options for purchasing gas and increase the security of natural gas supply. I also hope that the better supply of natural gas will replace other fossil fuels in Finland and thereby help us reach our climate targets,” Tiilikainen lists the benefits of the project.

“Special thanks for the pipeline are due to our Estonian partners and the European Commission for its strong commitment to the project. Balticconnector is an excellent example of deepening cooperation between Estonia and Finland. Now we are opening a common natural gas market, and next perhaps a tunnel connecting our two countries,” Minister Tiilikainen says.

A lot of effort has already been invested in making the energy systems more functional and efficient in the eastern Baltic Sea region. The Estlink 1 and 2 submarine power cables between Estonia and Finland were completed in 2006 and 2014. They integrate the Baltic and the Nordic energy markets. Their combined power transmission capacity is about 1,000 MW.

“The Balticconnector pipeline creates the conditions for setting up a joint regional gas market for Finland and the Baltic states. It is a pioneering project in the whole of Europe. The ministries, the national regulatory authorities and the transmission system operators of the four countries have committed to work closely together on the regional challenges concerning the development of the liberalised, transparent and effectively functioning common regional gas market,” Tiilikainen emphasises.

In July 2016, the European Commission awarded grants totalling EUR 187.5 million to Baltic Connector Oy and the Estonian transmission network company Elering AS for construction of the gas pipeline. The EU grants account for 75 per cent of the pipeline’s EUR 250 million total costs.

The project forms part of the EU’s Baltic Energy Market Interconnection Plan (BEMIP), which also provides a framework for development of the Baltic countries’ gas network and for construction of the Gas Interconnection Poland-Lithuania (GIPL) pipeline.

Vilhartti Hanhilahti, Special Adviser to the Minister of the Environment, Energy and Housing, tel. +358 40 836 4823