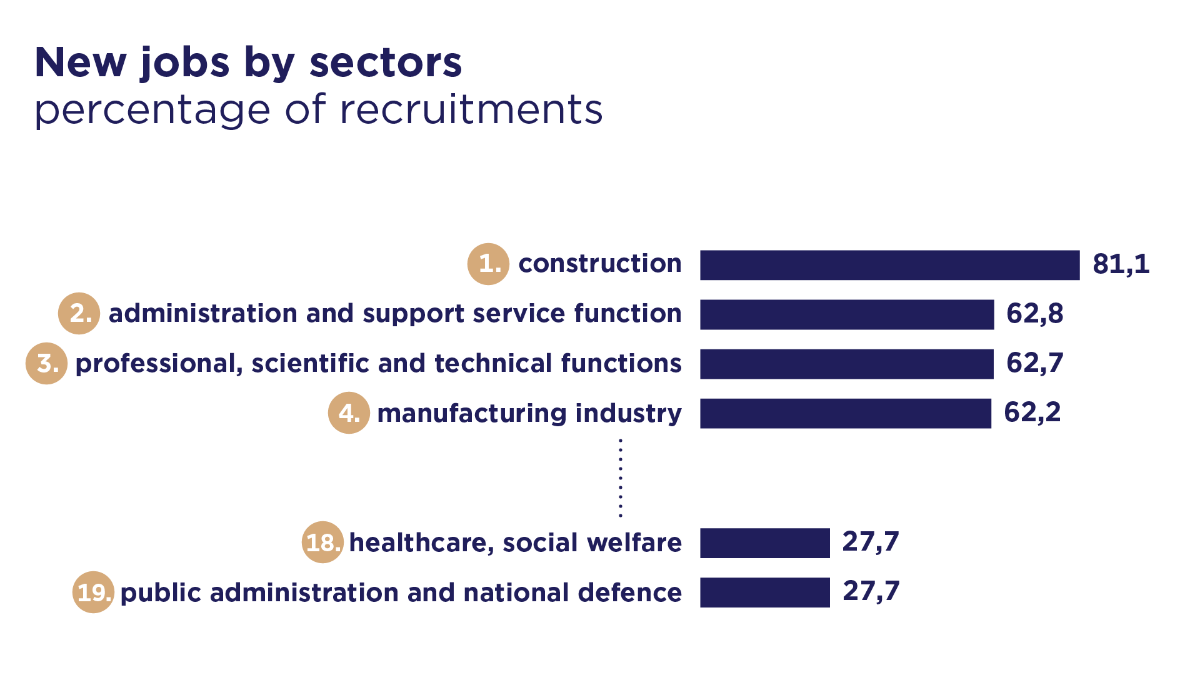 The total gross number of new jobs created in Finland in 2018 was approximately 337,000. The growth of new jobs was 4–5 times the increase in net employment, with the number of those employed increasing by almost 67,000. However, as employers recruited 736,000 people in total, recruitment volume was nearly 11 times higher.

The results are based on the figures for 2018, which marked a period of economic growth. At that time, economic growth had reached a mature stage and new people were recruited to occupations already existing in organisations while only a few entirely new jobs were created. Growth in the number of permanent jobs was quite strong. These were the results of a study commissioned by the Ministry of Economic Affairs and Employment published on 13 March 2020, which regularly examines the mechanism behind new job creation.

In 2018, labour shortage, or a situation where vacancies cannot be filled, reached a record level of 52,000 people. Approximately half of these were new vacancies. Recruitment problems primarily affected permanent vacancies, whereas it was easier to find labour for fixed-term jobs.

In relative terms, the largest number of new jobs were created in the construction sector, around 80%, and smallest in the healthcare and social welfare sectors and in public administration, around 28%. Fixed term jobs are typical in the construction sector, which explains the large proportion of new jobs. Meanwhile, in public services, recruitment focuses on replacement.

The following factors seemed to be conducive to new job creation: business sector employer, recruitment to at least two permanent positions, expected increase in the number of employees in the workplace, significant variation in the number of employees, a workplace employing fewer than 50 persons, foreign personnel in the workplace, the recruitment of a student, a school pupil, or an unemployed person.

Employers recruit labour to accommodate to workforce outflow and employee turnover, and when offering new jobs. A new job refers to more people being recruited for existing jobs in a workplace, or for completely new jobs. The data for this study included workplace-specific employer interviews conducted by Statistics Finland regarding employee recruitment.