Working Life Barometer 2020: Coronavirus period had a positive effect on work ability among people who could work remotely 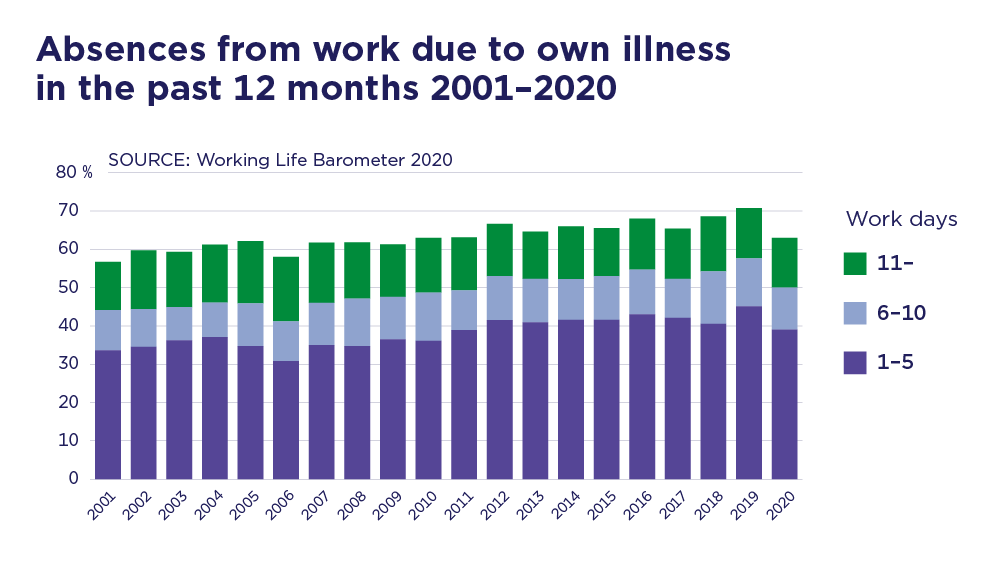 According to the Working Life Barometer 2020 published by the Ministry of Economic Affairs and Employment on 4 June 2021, the coronavirus pandemic had little effect on the physical and mental strain of work or work ability among all wage and salary earners. The level of stress or work exhaustion experienced also did not change significantly from 2019. However, there were clear differences between groups.

“The positive effects of remote work are reflected in the results. Good work capacity helps people to cope with work and stay at work longer. Employees that do well are key to productive work and lasting careers,” says Minister of Employment Tuula Haatainen.

With remote work becoming more common, more employees have an opportunity to choose where to work. Of wage and salary earners, 36% were able to have a significant or a fair amount of influence on where they work, compared with 29% in 2019.

The number of sick leaves, in particular short sick leaves, decreased considerably from 2019. Of wage and salary earners, 63% had been absent from work due to their own illness in the previous 12 months in 2020, compared with 71% in 2019. The coronavirus pandemic affected in particular the sick leaves of higher-ranking salaried employees, whose absences fell by 13 percentage points from 2019.

“Remote work, improved hand hygiene and safety distances explain the fall in the number of short absences during the epidemic. However, the results do not yet reflect the long-term effects of the epidemic. There is a risk that poor ergonomics will increase the incidence of musculoskeletal disorders. We must also closely monitor the trend in mental health problems and other psychological ill health,” Haatainen adds.

The amount of discrimination at work has not changed significantly in the long term. Only the discrimination of older people has decreased slightly from the beginning of the time series. As in previous years, discrimination of employees on fixed-term employment relationship was the most common reason for discrimination (11%) in 2020, according to the responses in Working Life Barometer.

Bullying at work is still common. In 2020, about 53% of wage and salary earners had witnessed at least occasional bullying by colleagues, supervisors or customers at their workplace. Women (62%) had witnessed it much more frequently than men (44%).

“Discrimination, bullying and violence have wide-ranging negative effects on wellbeing at work, participation in working life, length of careers and productivity. Unfair treatment undermines active participation in society and at its worst can lead to exclusion and a poorer quality of life. It is the Government’s objective to strengthen non-discrimination, gender equality and employment. By creating tools to promote equality at working life and by raising awareness, we can achieve positive development,” says Haatainen.

Membership in employee organisations on the rise during epidemic

Due to the weakening economy, more wage and salary earners than before feel insecure about their jobs, which has led them to join employee organisations in increasing numbers.

What is the Working Life Barometer?

Conducted since 1992, the Working Life Barometer is a sample study that examines the development of the quality of working life from the viewpoint of Finnish employees. The data for 2020 are based on telephone interviews conducted by Statistics Finland in August and September in connection with the Labour Force Survey. 1,647 wage and salary earners responded to the barometer study in 2020. The data can reliably be generalised to apply to employees everywhere in Finland and in all sectors.