Tekes and Finpro to be merged, the role of the Ministry for Foreign Affairs will strengthen in the promotion of exports 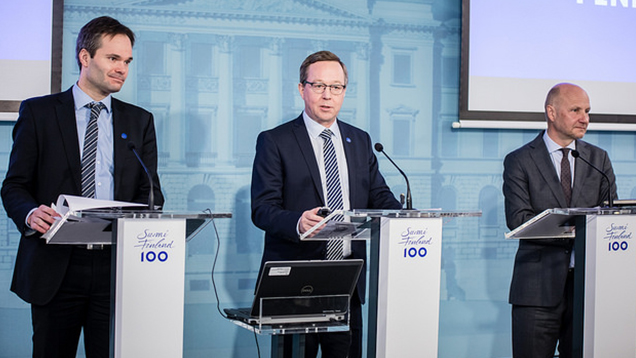 Tekes, the Finnish Funding Agency for Innovation and Finpro, a provider of internationalisation advisory services, will be merged into a new operator carrying the working title Business Finland. Business Finland will gather all services related to the promotion of innovation funding, exports, investments and tourism under one roof. About 600 experts will be transferred to the new organisation.

Abroad, co-operation with the Ministry for Foreign Affairs will be intensified and the heads of missions will assume wider responsibility for the entire field also as regards exports and the internationalisation of companies. Together with the diplomatic missions, Business Finland will form a stronger Team Finland network globally.

The Government outlined the reform in its strategy session on Monday. The Ministry of Economic Affairs and Employment will start the preparations for establishing the new operator immediately. The objective is that Business Finland will begin its operations at the beginning of 2018.

With the help of the reform, it will be possible to take into account the entire life cycle of the growth and internationalisation of companies. A uniform service pathway will begin from the development of products, services and business models and continue to the introduction of the innovation in the markets, and there will be no break in the chain at any point, says Minister of Economic Affairs Mika Lintilä.

The achievements of Tekes and Finpro have been good, but by merging them, it will be possible to reduce the partial overlapping and free people to work in the field, Lintilä continues.

The reform is aimed at allocating a larger number of people to customer services both in Finland and abroad. The responsibilities of the units of Tekes and Finpro, which are Export Finland, Invest Finland and Visit Finland, will not change in the reform, but the way to organise and provide the services will be harmonised.

The purpose of the change is to improve the services provided for customers – growth-oriented companies aiming at internationalisation. The customer will in future be served by one organisation instead of two. The new model will be as step closer to Team Finland’s promise of a one-stop-shop service, says Minister Lintilä.

The reform enables moving the focus of resources in export promotion from Finland to a network abroad, like our most successful competitors have done, states Minister for Foreign Trade and Development Kai Mykkänen.

At the same time, the importance of export promotion is increased in the work of embassies by strengthening the role of the ambassador as a country manager of Team Finland’s work and, on the other hand, the role of Business Finland in steering the content of export promotion as regards the resources of the Ministry for Foreign Affairs, Mykkänen says.

These changes are part of the Team Finland reform that was launched last autumn. The aim of the reform is to support the Government’s objective to double the exports of small and medium-sized enterprises by 2020.