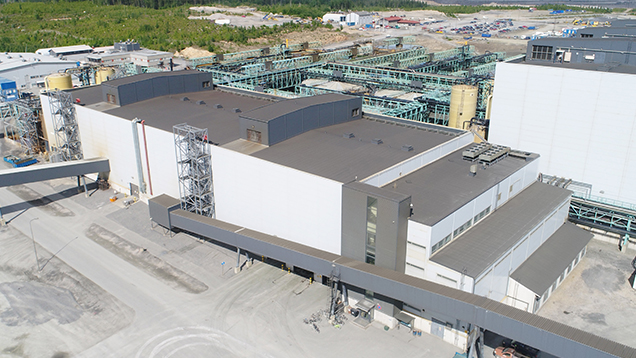 On 31 October 2017, multi-metal company Terrafame Ltd delivered a licence application under the Nuclear Energy Act to the Ministry of Economic Affairs and Employment. The application is addressed to the Government and is for the recovery of natural uranium obtained as a by-product of mining activities at Sotkamo. The main products from the mine are nickel and zinc.

The Terrafame industrial site includes an almost fully built uranium recovery facility from the time of the company’s predecessor. Once the completion work is performed, it will be possible to recover uranium at the facility.

According to the company's licence application, uranium is present in small concentrations in the bedrock at the Sotkamo mine. The intention is that the extraction process will enable the uranium to be used as a semi-finished product for further processing into nuclear fuel abroad. The company asserts that uranium recovery would be economically viable and would allow natural resources to be used more effectively in Terrafame’s mining activities. A positive environmental impact would occur in that considerably less uranium would end up in the bioheapleaching facilities, the process sediment tanks and current metal products.

On 6 November 2017, the Ministry of Economic Affairs and Employment will publish a public notice about Terrafame’s uranium recovery project in the region’s newspapers and on the Ministry's website at tem.fi.

Terrafame Ltd will distribute general information about the project to all households in the municipalities of Sotkamo and Kajaani.

Ministry to organise consultation meeting, open to all, on the uranium recovery project under the Nuclear Energy Act on Tuesday 7 November 2017 starting at 18.00 in the Iso-Pölly auditorium (Pallohalli building) of Vuokatin urheiluopisto/Vuokatti Sport Resort (address: Opistontie 4, Vuokatti).

The Ministry of Economic Affairs and Employment will be requesting statements about the application from other ministries, public authorities and the municipalities in which the project is located as well as the neighbouring municipalities.

Opinions on the project may be submitted in writing by 31 January 2018 to the Registry of the Ministry of Economic Affairs and Employment, at the following address: Ministry of Economic Affairs and Employment, PO Box 32, FI-00023 GOVERNMENT. Documents may also be left with the Government’s mail distribution centre, addressed to the Ministry, at the following address: Ritarikatu 2B, Helsinki. Opinions may also be submitted electronically by 31 January 2018 to the following email address: kuuleminen(at)tem.fi.

The opinions and statements supplied must refer to document number TEM/1879/08.05.01/2017 and must include the name and address of the person or body submitting the comments.